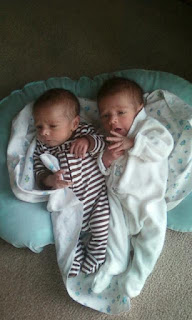 
The normal way for a baby to be born is head first, and generally speaking it’s also the safest. Not all babies play by the rules, however, and many are not head down at the end of pregnancy. Babies can be in a couple different positions if they are not head down. When a baby is facing side to side, they are said to be transverse. If their bottom is down ready to come out first, this is called the breech position.


It is possible for a baby to be born breech, though most physicians are not trained in handling a vaginal breech birth. Breech birth requires specialized training and with a skilled care provider it can be perfectly fine. Most of the time however, a baby whose position is breech at the end of pregnancy will be scheduled for a cesarean.


Nobody knows why some babies turn breech. Whatever the reason, moms and those who work with pregnant women have every trick in the book for trying to turn a breech baby.

Each method will work for someone somewhere. Some babies are committed to being breech and others are easily encouraged to turn.


An often under-utilized method of turning a breech baby is seeing the chiropractor. Chiropractic has an extremely effective method of turning breech babies and it called the Webster Technique. In short, the Webster technique releases tension in the pelvis. It gives the baby more room to have an opportunity to turn. The Webster Technique is so effective that it is said to turn babies who are either transverse or breech to a head down position in over 80% of cases. There are no risks involved so it's a perfectly healthy way to try to turn a baby.

Chiropractic care and spinningbabies.com can prevent a baby from going into a breech position. But if you find yourself in this position, you want to avoid a cesarean, and you want to turn your baby prior to birth, do all the things! And make sure you see a chiropractor that is certified in Webster Technique, such as myself.
Posted by Dr. Felicia Conner, DC, DICCP at 11:43 AM